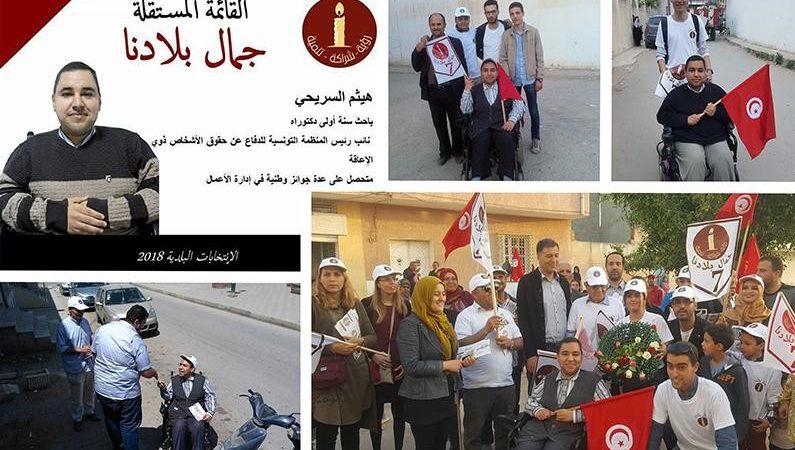 At just 24 years old, Haythem Srihi is a member of the Hack4Democracy (H4D) finale’s winning team and a newly elected municipal councilor from the city of Jammel in Tunisia.  Haythem’s success in both the H4D competition and in the May 6 municipal elections serves as a prime example of what Tunisian youth can achieve when they are given the tools to prosper and have the drive to overcome societal barriers.  Hack4Democracy is an initiative that combines democracy camps and hackathons and uses technology to engage youth in civic activism.

Haythem and his H4D teammates H4D winning project idea – “Bikom likom” (“with you and for you”) is a web and mobile application that allows citizens to express their level of satisfaction with services in their municipality and propose improvements.  Haythem, who has a physical disability, proudly expresses how much he benefited from the H4D experience “I participated before in several competitions, but in the H4D, it was the first time that I could get on the podium using a ramp”.

Winning the H4D competition inspired Haythem to run on an independent list for the first municipal elections since the 2011 popular uprising that ousted former President Zine El Abidine Ben Ali.  He wanted to demonstrate to his community his belief that elections and democracy can improve the daily lives of citizens.

Before deciding to run for the elections, Haythem convinced all the candidate lists in Jammel to sign the Local Community Service Charter for People with Disabilities, which he developed to guarantee a minimum set of rights for persons with disabilities in his municipality.  After joining his independent list, he translated the list’s platform into sign language and actively campaigned for his list.

Citizens of Jammel responded positively, as his candidate list garnered the most votes on Election Day, defeating the major national political party.  Haythem’s list obtained 10 seats out of 30 in the newly elected municipal council, guaranteeing him a seat as the ninth candidate on the list.  Haythem subsequently became one of 144 municipal council members with disabilities elected on May 6, out of 7,212 candidates across all lists nationwide.

“I will never forget the May 6 Election Day, because I met a deaf man who was trying to speak to me but I couldn’t understand him, so, he wrote to me on a piece of paper, ‘I voted for your list, Jammel, our city, because you are my voice, you are the voice of voiceless people.’ His words meant a lot to me”.

Haythem is now preparing to serve his community as an effective municipal council member. At the same time, he and his teammates are developing their H4D project while continuing to advocate for the inclusion of persons with disabilities in their community.  Haythem is still pursuing his studies in biology and will soon publish his third book, The Reality of Disability in Tunisia.  Haythem concludes that “success is not exclusive to one category of people; success is accessible to everyone who is a hard worker and who thinks outside of the box”.

The initiative is funded by the U.S.-Middle East Partnership Initiative (MEPI) and launched by the International Foundation for Electoral Systems (IFES).