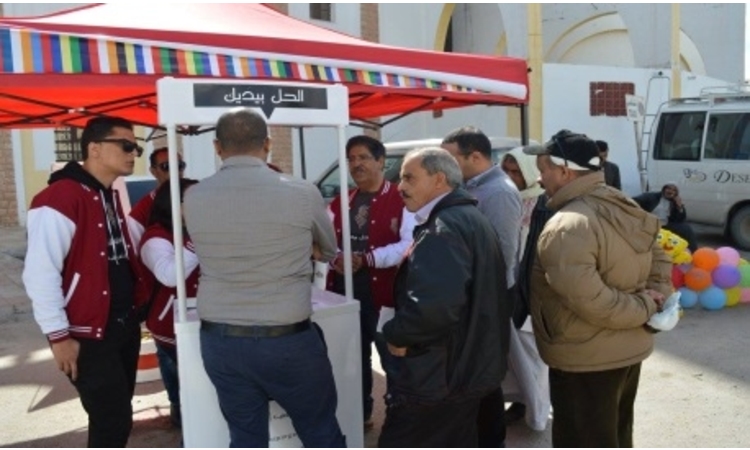 The advent of the Tunisian revolution has brought about renewed interest among citizens about how they can play a greater role in holding their government accountable.  They often lack the knowledge, however, about the tools and resources at their disposal to do so.

The Tunisian Association of Public Auditors (Association Tunisienne des Contrôleurs Publics, or ATCP) therefore organized a series of awareness campaigns in the regions of Tunisia, under the slogan “The solution is in your hands.  Participate, request information and hold government accountable.”  During February 2017, ATCP launched these awareness campaigns in the cities of Tabarka, Jendouba, El Kef, Kairouan, Gabes and Nefta.  During March 2017, ATCP launched them in the cities of Tozeur, Douz and Gafsa.  In total, the awareness campaigns helped reach an estimated 3,000 citizens in 9 cities located in the Southern and Western regions of Tunisia, where the development need is the greatest.  Furthermore, the campaigns were covered by several local and national newspapers, and television and radio stations.

These awareness campaigns included an online component through social media, to draw attention and incite curiosity about open government initiatives in Tunisia.  The campaigns also included an in-person component, where ATCP mounted a centrally-located information kiosk to raise awareness among citizens about how transparent and accountable governments can improve their lives.

Specifically, topics discussed included how citizens can request information from government institutions and participate in the public decision-making process.  ATCP also provided citizens with a short, citizen-friendly flyer that contained practical guidance on how to use the various legal and/or IT tools (e.g., the Right to Information law) to advocate government institutions for greater transparency and accountability.  At each city, citizens approached the kiosk to ask questions about the procedures of accessing government information, and participating in the meetings and decision-making process of their local governments.

As a result, thousands of citizens in Tunisia obtained a better understanding of the importance of open government issues, and the role they can play in holding their government accountable.  They learned about their rights and the power they have to enact change by requesting information and advocating for reforms.

FSVC’s program is funded by the U.S.  Department of State’s Bureau of Near Eastern Affairs/Assistance Coordination Bureau, and aims to increase the effectiveness and accountability of the Government of Tunisia in implementing open government policies and strengthen the capacity of CSOs to advocate effectively for these policies.